The CLAWS [Central London and West]  run started at 6pm from the Civil Service Club in Great Scotland Yard Ave, which was 20 minute walk from J&W.

It was a run/walk around most of the major sites in Central London including the South Side of the Thames. We were all given a sheet a paper with squares to enter letters from various location clues around the city. It was a good way to see the monuments that we had seem or missed in the past. We both walked due to my sore calf muscle and Dave’s continuing knee problems. The evening was warm and as per usual all the hashers were friendly. The trail was well marked and easy to follow considering the 100’s and 1,000’s of people out on the Street on the warm summers evening. After 1-2 hours we had an ‘On ON’ in small park then back to the Officers Club for chips, burger and salad. Plus beer, of course.

About 150 hashers including the Wessex members who we often see when away on overseas hash trips.

We were given a Tshirt for the event and it was not until a couple of days later that I could figure out what was on the shirt. Have a look at the pictures. 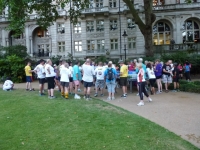 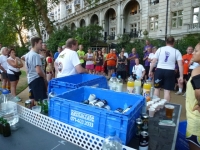 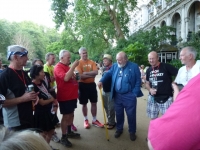 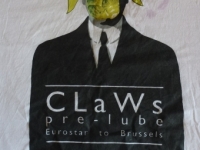 The 2pm Eurostar train to Brussels along with lots of other hashers, saw us arrive about 4pm and caught a cab from the station with 4 Wessex hashers to the Husa President Hotel. After dropping off our bags we walked to the venue – Tour and Taxis – which is large older warehouses complex in the process of being converted into upmarket shopping. The Hash had an open warehouse area that easily fitted 3,000 hashers that were going to be there over the weekend. The venue tended to be noisy/echoing due to the age and type of building it was.

Allan, Pam, Dave and I had meal at a manmade beach entertainment area close by on the edge of a canal, which was crowded with people sitting in the evening eating and drinking. Lots of younger people hanging around socialising. The meal was an edible bowl filled with salad which include meat, avocado, tomato etc. Very nice

A quick walk to the Tour and Taxis to register for the weekend activities. There were numerous ways to walk from the hotel to the venue, some more dodgy than others. There was a high rise housing complex behind the hotel and the large police station next to the hotel. I would not want to be walking around here at night by myself and luckily there are buses available from 10:30 to take people to select hotels around central Brussels.

With the Wessex hashers – Gates, Poppet, Mr Beaky, Thirsty Ferret and Jackie – we decide to go to central Brussels via the Metro. There was much too and frowing and lots of discussion at the metro station trying to figure out how to purchase a train pass. In the end we all purchased a 5 trip ticket for E8 each. Then we had to figure out which direction to go to get to the middle of the city. There was a lot of laughter but we figured it out in the end. English signage was lacking.

We exited the Metro for more wandering around until we found the central old square. Allan was adament that he was going to show us a restaurant he had visited 30 years ago that had pigs bladders hanging from the ceiling. He must have visited most of the restaurants on the square until he found it, but he was disappointed that the bladders were so small and few as what he remember. Maybe this comes with age or did they dry up and disappear over time?

We were thirsty and found a pub that sold beer for E1 and spent the next 3 hours sitting outside enjoying each other’s company including a hasher from Scarborough who wandered by, who the Wessex hashers knew.

Off back to venue and we decided to walk there, as we all felt quite good after the afternoon in sun. Somehow we found a canal and followed this until we came across Tours and Taxis venue. 3km walk

The OnOn started not long after we arrived back, therefore there was more beer and wine. Food serveries were opened. Food was basic but OK.

There was lots of catching up with old friends, although difficult to talk due to the noisy environment. 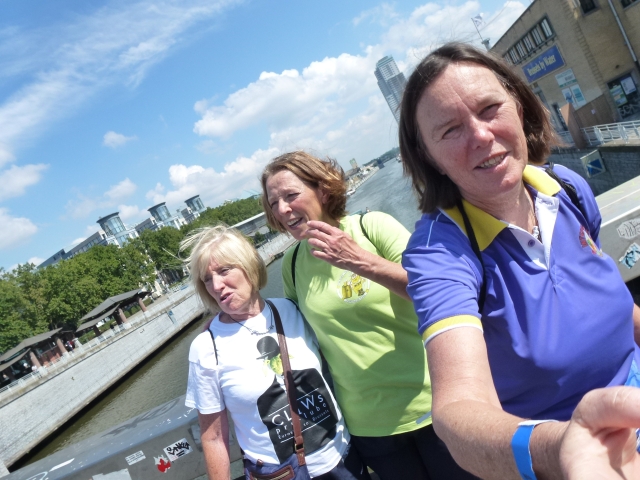 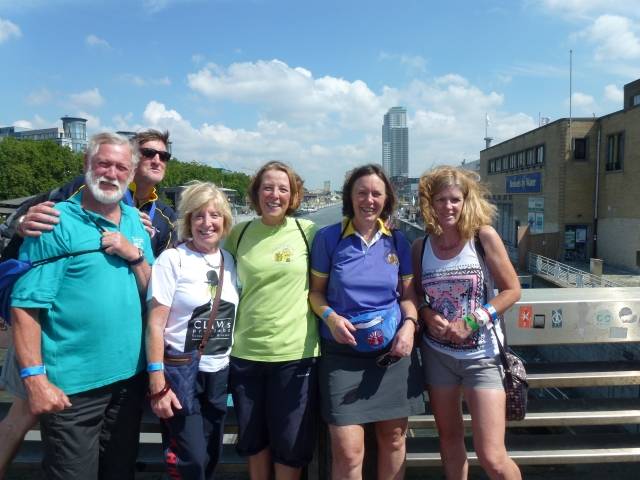 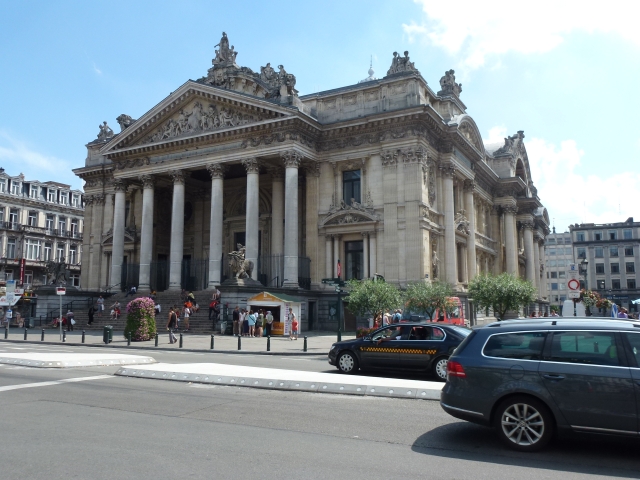 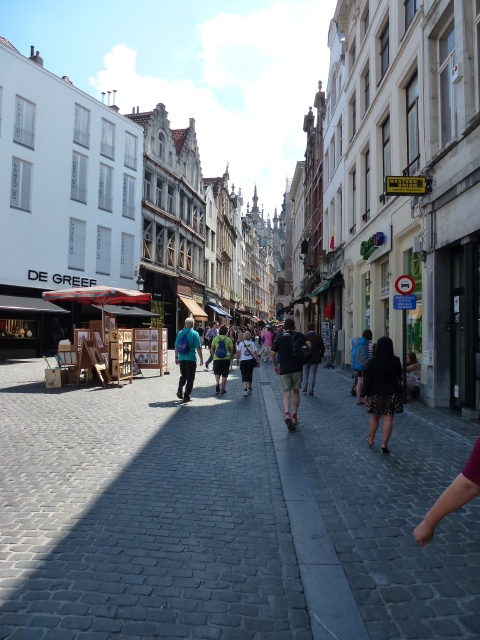 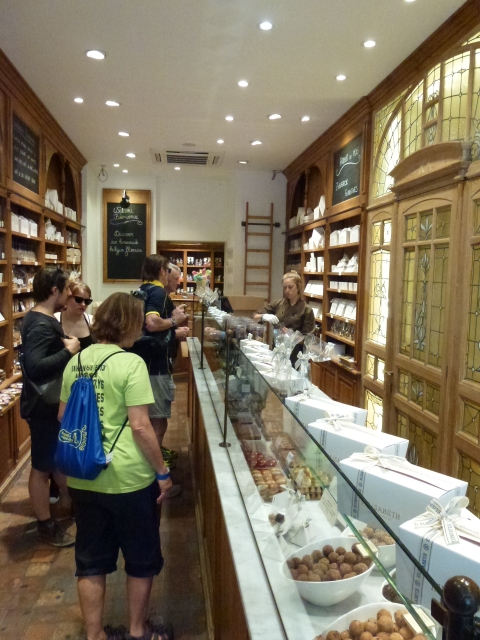 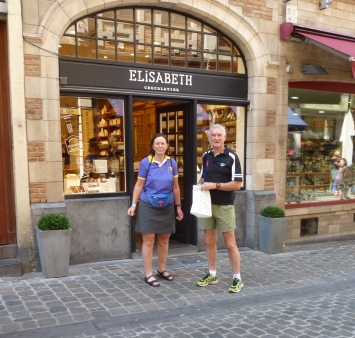 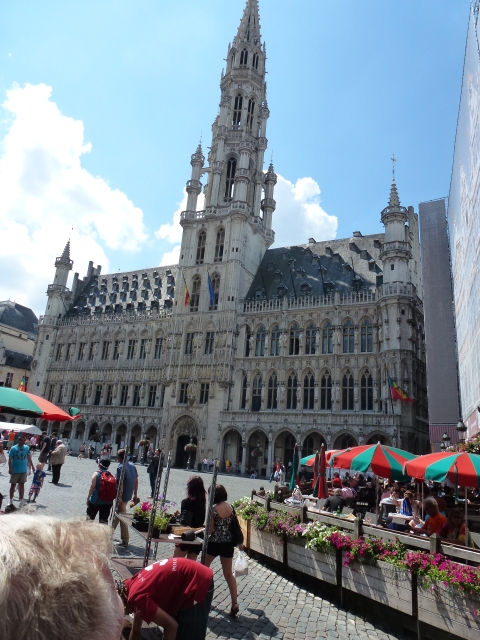 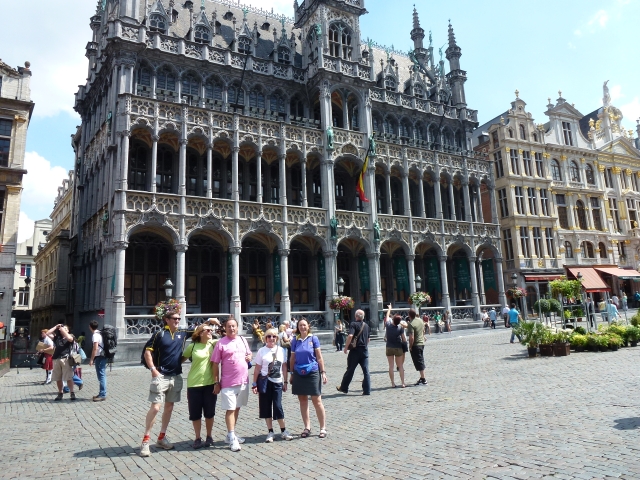 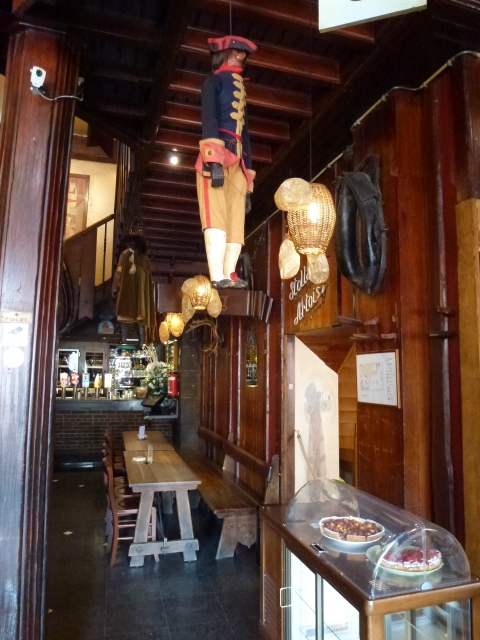 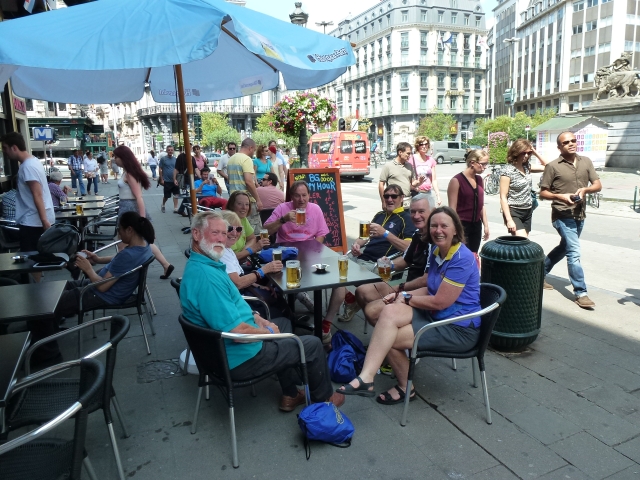 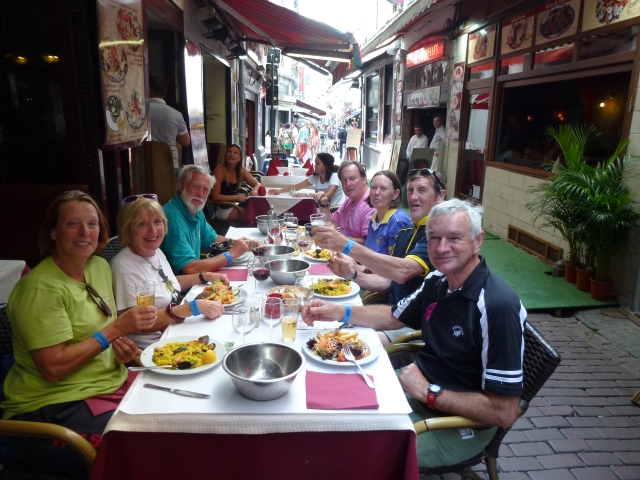 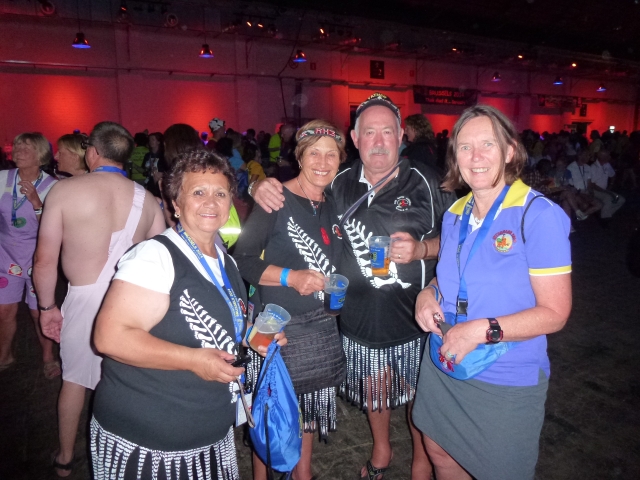 The location from where to catch the buses from for the runs, was some distance from the hotel in the Parc du Cinquantenaire, therefore we had to catch the metro to get there, which included a train transfer. It was a little confusing again mainly as none of us could read or speak Flemish and English was lacking.

Dave and my first choice of bus was full, therefore went to another bus. We were not sure where we were going and ended up a small village in Flanders. From here we ran [or rather walked in our cases and most of the others] down little farm roads. These were about 4m wide and were either concrete or cobbled and were through corn, marrow, turnip, salad plants etc and went from one small village to another. Each village had an old church and the houses were mostly large and well looked after. Some had lovely old gardens with flowers. The day was very warm and muggy.

Following more beer and very very light snack it was back to the city. Luckily we had figured out that the bus route was about 1km from our hotel, therefore we asked the driver if we could be dropped off so that we could go the hotel for a shower before going to Tours and Taxis for the nights event.

The food was similar to the prior nights. Saturday night had theme to dress too, if you wanted. Comic character. I borrowed one of the Wessex Flintstone long Tshirts which looked good considering there were lots of Flinstones.

Hardy UK hash went as Willie Wonkas from Charlie and the Chocolate Factory. They won the group prize. The individual finalists was between a woman who hardly anything on [not sure who she was trying to be] and male also were hardly wore anything other than shorts and small green ears. Since he was very round/fat, had no front teeth, bald and had painted himself completely green he was the perfect ‘Shrek’ and won.

The hash acts were excellent and the best seen for some considerable time. These included a hasher signing Queens Bohemian Rhapsody with the words changed. An India hash doing a Bollywood performance with a twist. Hamersley Hash doing a repeat of Jersey Boys that they had performed at Hainan Interhash, although more polished and an added song or two. Brumby Hash signing and performing to Rawhide 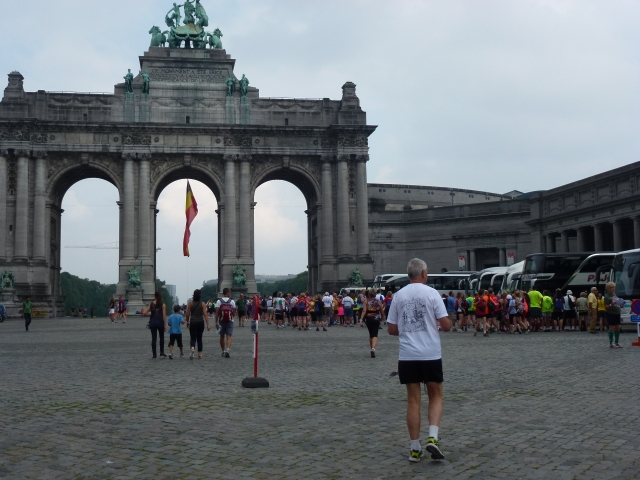 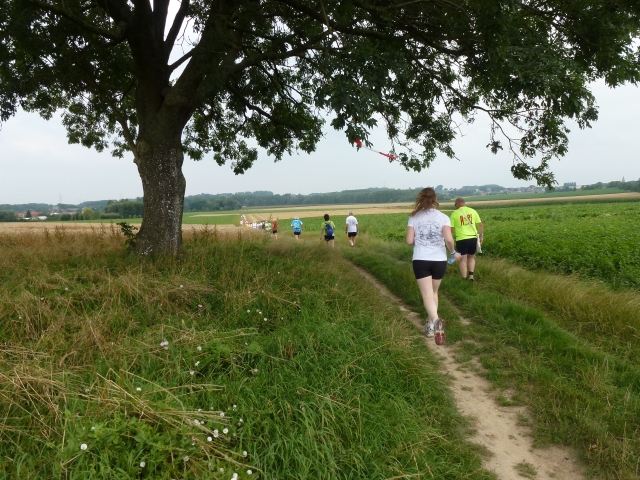 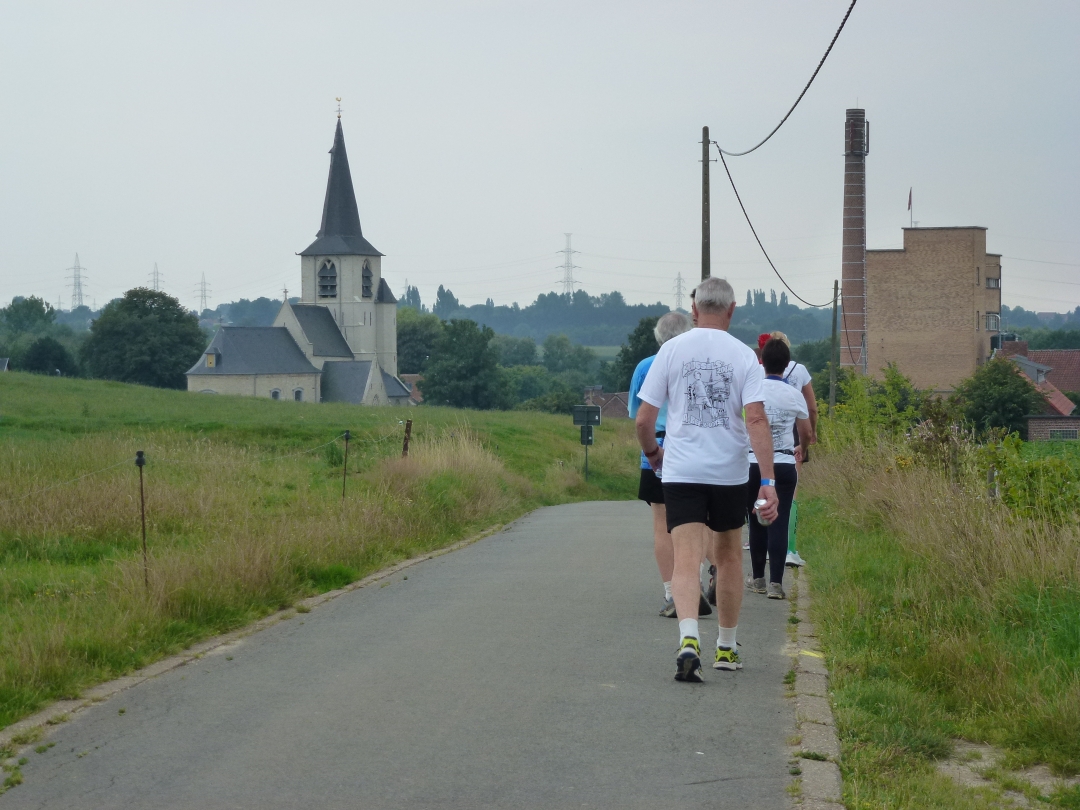 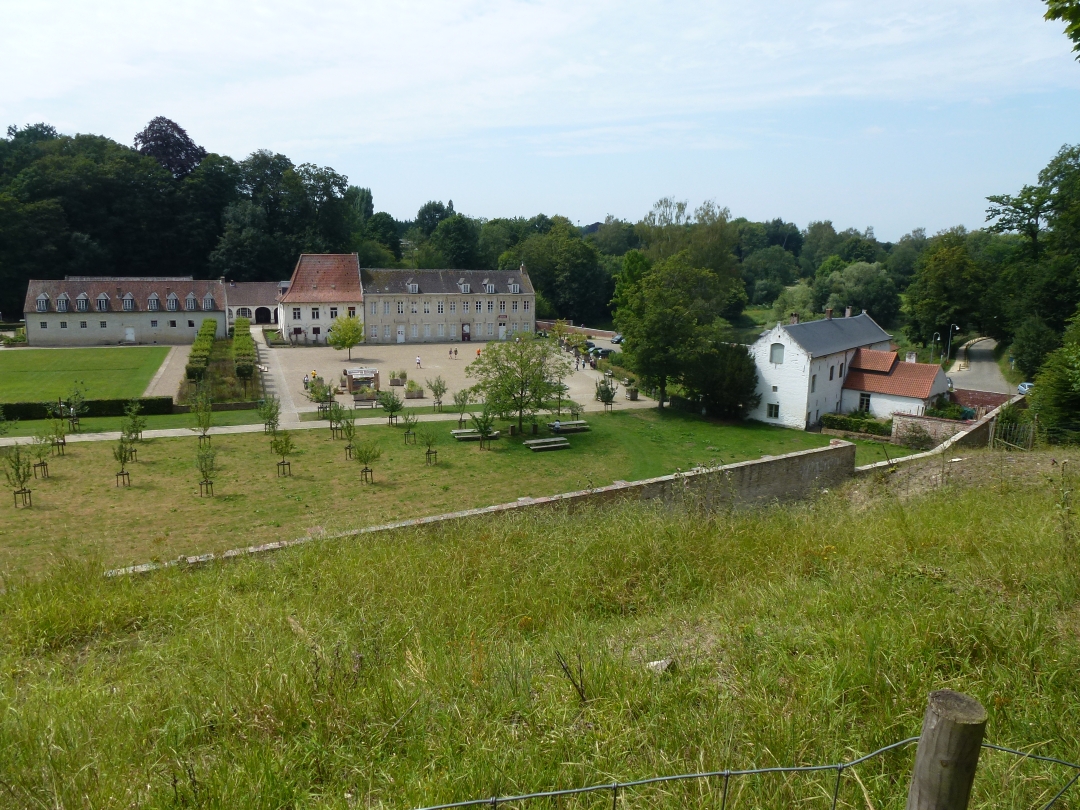 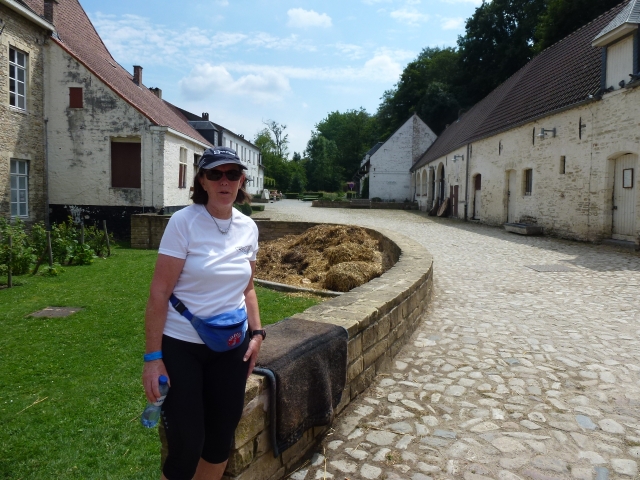 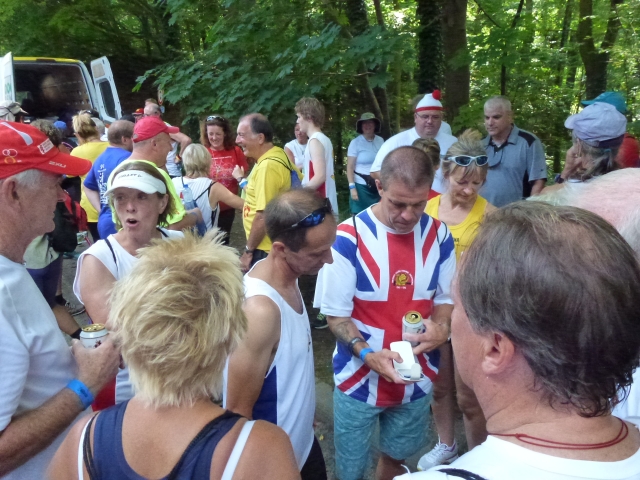 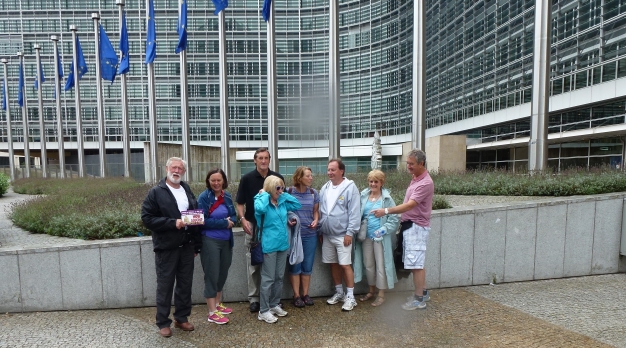 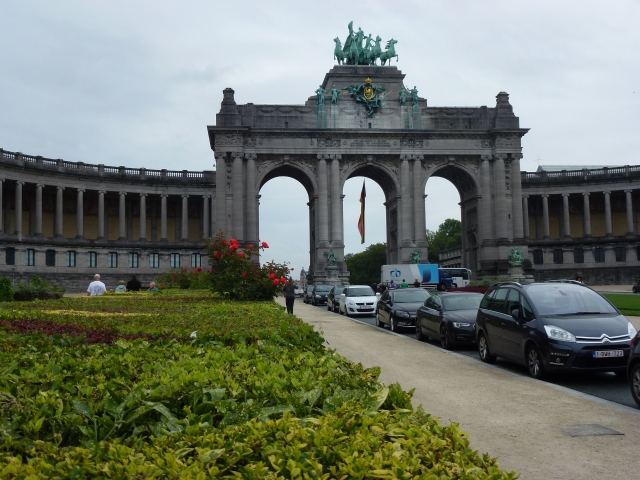 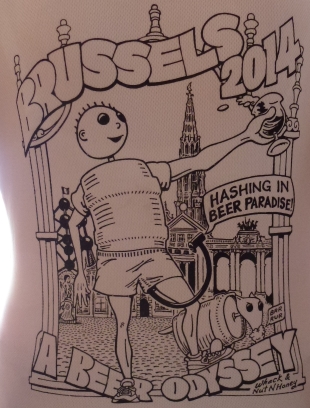 The run we choose this time was set at the end of the Metro line in a forest park which had an old Abbey set up for people to picnic in the grounds. We ran and walked through forest walkways for a few hours ending up at a small park near the Metro station. Again very light snack lunch consisting of small packet of chips, 1 orange.

Caught the Metro back towards the city figuring out how to get the station we needed – Gare Du Nord Noorstation – to get back to our hotel then onto the venue.

More food, drinking, talking, only one act by two Wessex guys who had nothing on other than 2 beach towels that they pulled off each other – very clever. The band played to 12:30 with lots of dancing [not a lot by Dave] then back to the hotel for well needed sleep.

Another day wandering around Brussels with the Wessex crowd. Visit the UE headquarters had were told to leave. One of the Wessex is a member of UK Independant party and wanted to leave a reminder there.

After flight with RyanAir to Malaga for a well-earned rest. The Flight was ok (less than 3 hours) as for some reason, that we are unsure of, we had priority bookings which gave us a set seat, first on and off the plane. We left Brussels at 8pm and it was good that Dave had booked a shuttle in Malaga to get us to the hotel Las Vegas where were staying. In bed by midnight